In 2013 Katherine E. Smith made a $500,000 gift commitment to create an endowed professorship in the Healthy Children and Families program of the College of Public Health and Human Sciences. A planned gift in her estate for the endowment will further increase its impact. 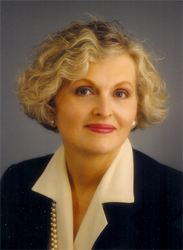 Born in Chicago, Smith and her family moved to Oregon where she attended schools in Portland and Salem. Her interest in the food industry was sparked by her father, who worked in ice cream manufacturing. Her parents also modeled a commitment to volunteerism, and at OSU Smith learned to juggle classes, work, volunteer roles, and social life: a skill that remained important throughout her life. After graduating in 1961, she launched a successful career that included executive roles with Quaker Oats, A&P, and Pillsbury. She was an OSU Foundation Trustee, served on the College of Home Economics and Education Council, and co-chaired the drive to create the Mercedes A. Bates Family Study Center, the nation’s first center dedicated to studying families during their entire lifespan. She was named an OSU Alumni Fellow (1989), OSU Home Economics Distinguished Alumnus (1989), and National Home Economist of the Year (1988).

While programs may evolve with the times, she says, “I would want OSU’s commitment to improving the lives of children, families, and communities and addressing contemporary public health issues to remain.”