A 1946 business alumna, Shirley Droschkey designated part of her estate to Oregon State University to create an endowed professorship in accounting. 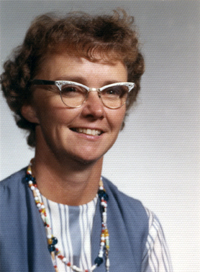 After graduating from OSU, Shirley became a bookkeeper for a local logging firm in her hometown of Cove in Eastern Oregon. Later she took a job teaching business classes at Cove High School, where she served as teacher and principal for 14 years. She also raised champion race horses, winning awards in five states. She passed away in 2011. Her late husband, William R. Droschkey, worked as a pharmacist in Cove. The couple's estate also benefited his alma mater, the University of Utah College of Pharmacy.

Funds from the Shirley E. Droschkey Professorship help to recruit and retain accounting faculty who have demonstrated excellence in teaching and research.