Bob and Barbara Bailey have made plans through their estate to create three endowments at OSU. One will support the 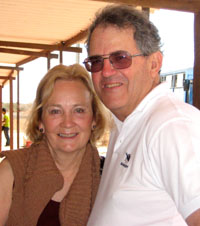 Master Gardener statewide coordinator position that oversees the education of Oregonians interested in the art and science of growing and caring for plants. The second will provide faculty support for research activities at the Mid-Columbia Agricultural Research and Extension Center (MCAREC) related to cherry production and other tree fruit. The third will support student experiential learning in the College of Business Austin Entrepreneurship Program.

A 1963 graduate of the College of Business with a minor in horticulture, Bob Bailey is chairman of Orchard View Farms, a family-owned and operated cherry-growing and packing business in The Dalles, Ore. Established by his grandparents in 1923, the company is the largest sweet cherry growing operation in the nation. Bob helped develop and promote technology that allows cherries to maintain their freshness longer, opening up new markets in Asia. In 2002 the Baileys became the first family in the Northwest to receive the national Steward of the Land Award from American Farmland Trust.

Bob's and Barbara's daughter, Brenda Frances Bailey-Thomas, is now president of Orchard View Farms; she graduated from OSU in 1991 with a doctorate in veterinary medicine. The Bailey family has many other ties to Oregon State University, and has long been involved with OSU Extension Service, Hood River's Experiment Station, and the Austin Family Business Program. Bob has been a member of the MCAREC Advisory Board, the Austin Family Business Advisory Council, and the College of Agricultural Sciences Campaign Cabinet. He received OSU's Distinguished Service Award in 2001.

In addition to his prominence in agribusiness, Bob Bailey is known as one of Oregon's education leaders. He served eight years on the Oregon State Board of Higher Education, including service as president from 1992-93. He was credited with helping Oregon's public universities weather potentially devastating budget cuts that resulted from passage of Ballot Measure 5.