Great Leaders Pave the Way for More To Follow

When President Isabel Núñez Pérez, ’21, and Vice President Metzin Rodriguez, ’21, were elected to lead the Associated Students of Oregon State University (ASOSU), they had a solid grasp on what to expect.

There were the staples of the job: Responsibility. Advocacy. Managing a work-school-life balance.

Lurking ahead, too, were potential challenges unique to the pair as the first dual-Latina ticket elected to ASOSU: Representation for their communities — both a burden and a gift. Systemic barriers. Heightened scrutiny.

Just weeks later, a global pandemic changed the job outlook as well as the planned route for their senior year.

The duo’s campaign platform for a “DAM United” Oregon State was heavily influenced by the new normal.

“Because of the pandemic, there’s been a lot of crisis mitigation. I’ve learned a ton of flexibility,” says Pérez, graduating with a political science degree with an option in law and politics and minor in Spanish. “But there’s also been really great moments of development, coming into my leadership style with executive staff and helping them navigate different situations.”

Connecting with groups across campus was made more difficult in a virtual world with students facing video-call burnout, but student’s material and emotional needs were greater than ever.

Increased services were high on the priority list for the president, vice president and their executive staff. They worked with a vast base of community leaders to increase resources for students, empower future leaders and place inclusivity at the forefront.

“As president of the Senate, I get to interact with the legislative branch of ASOSU,” says Rodriguez, graduating with a bioresource research degree with an option in sustainable ecosystems and minor in Spanish. “When students have an issue, they come to our meetings and we try to find ways to either pass a resolution or interact with students supporting a certain cause.”

One of her proud achievements includes ASOSU allocating more funding for legal services for Deferred Action for Childhood Arrivals (DACA) and other undocumented students as well as mixed-immigration status families in a decision by the Student Advisory Board and Student Fee Committee.

She also points to the community of leaders surrounding her.

“Our executive team has been the most diverse it has ever been, in terms of backgrounds, identities, majors and different perspectives,” says Rodriguez. “To not remain in the same static perspective and focusing on other areas of intersectionality has been helpful for us.” 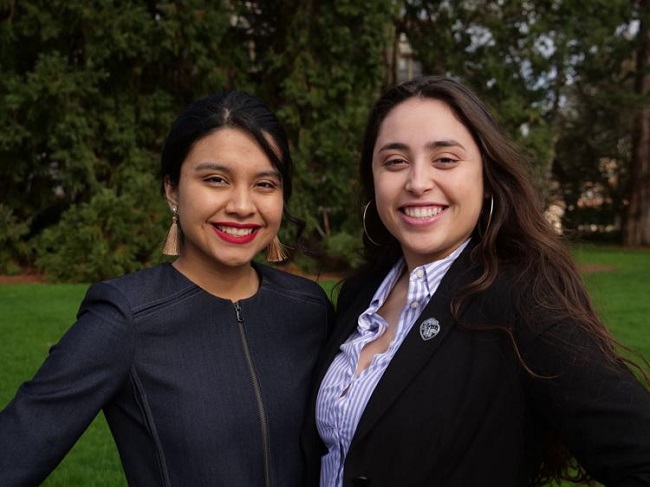 Facing the challenges of the moment head-on

In part, Pérez credits the strong resurgence of the Black Lives Matter movement in the summer of 2020 as opening doors to difficult conversations about the widely varying experiences of OSU students.

The pair also used their platform to spark political participation among OSU students, a significant contribution to a national election that saw increased young voter turnout.

In fall 2020, their major voting awareness, registration and education initiative brought together partners from across the university to get students registered to vote — “but more importantly,” says Rodriguez, “actually get them to submit their ballot.”

Making history — and building the future

Despite breaking barriers as Latina women in campus leadership, Pérez and Rodriguez view their roles as paving the way for more sustainable change.

Knowing there is no one-size-fits-all path, they aim to inspire the next leaders to take action not only in student government, but also lobbying with the Beaver Caucus and other advocacy programs.

As two soon-to-be graduates, they are hopeful about the future for OSU student and alumni interactions as intergenerational connections grow.

“Leaving school and your community and friends and then going into the real world, you feel like you have to shield part of yourself and your authenticity,” says Pérez. “It’s difficult, because not everyone has to do that — to hide certain parts of themselves to blend into professional spaces. So that’s very valuable to have people that you can ask questions to, or they can help you figure out how to present yourself while also maintaining your personal integrity and authenticity.”