The late N.B. "Nat" Giustina, a 1941 OSU graduate and owner of an Oregon timber business, was well-known for his love of golf.

In the mid-1960s Giustina established the Tokatee Golf Club on the McKenzie River in Blue River, Oregon. He was a long 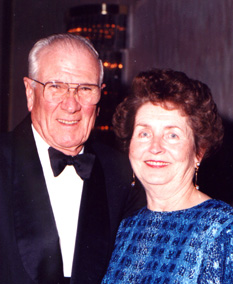 time volunteer for OSU, serving 25 years on the OSU Foundation Board and spearheading the effort to create the Trysting Tree Golf Club, a championship 18-hole golf course in Corvallis, the proceeds of which benefit the university.

Giustina, who died in August 2005, asked that his family make a gift to The Campaign for OSU after he passed away. In 2008 his wife, Jacqueline, and his children decided to direct a $1 million of that gift to create a professorship in turf management.

The N.B. and Jacqueline Giustina Professorship in Turf Management is designed to support a faculty member to build on the work of Tom Cook, who established the program and retired in 2008. Under Cook's direction, OSU's turf management program earned national recognition and produced graduates who have served as superintendents of prominent golf courses including Bandon Dunes, Pebble Beach, and Pronghorn. Cook also devised new approaches to making golf courses environmentally "green."