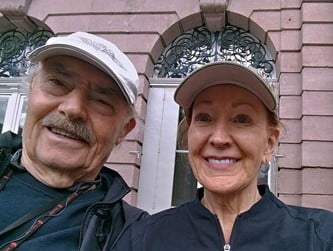 A couple with roots in Corvallis and a deep commitment to education have decided to leave their entire estate to OSU. But that’s not all. Wishing to see their impact begin immediately, Murray and Linda Smith have made an initial outright gift of $1 million to create opportunities for students and faculty right away.

The story of Murray and Linda Smith’s gift to Oregon State University begins with an earlier generation, in another country. In the 1920s, a young, recent college grad launched his teaching career at a small rural school in Saskatchewan, Canada. There he met the daughter of a local wheat farmer.

Following a prolonged courtship, the couple married. And together, the pair – Murray’s parents, Cairns and Laura Smith – began a long and atypical journey. Although it was during the Great Depression, both Cairns and Laura were determined to improve their educational qualifications.

The couple emigrated to the United States, where both managed to complete their advanced degrees, Cairns earning a Ph.D. in history, and Laura, a master’s in fine arts.

“This was an exceptional achievement during difficult times,” Murray observes. “But it also resulted in the acquisition of considerable borrowed debt, which would have a major influence on their personal and professional lives for many years thereafter.”

Even more than now, it was then especially difficult for a married couple to find teaching positions at the same college or university. In fact, during World War II, many institutions of higher learning even had restrictions against allowing more than one full-time teaching position within a family.

This meant that Murray’s parents often had to accept teaching positions at separate institutions in order to pay off their student debt. Many times these were located in different areas of the country – California, New York, Texas, Kansas or other locations while teaching summer school sessions.

Then Cairns was offered a history teaching position at Oregon State College.

In 1944-45, Professor Cairns Smith taught his first year at Oregon State. He decided Corvallis would be a good place to put down some roots and give Murray a chance to grow up without having to constantly move around the country.

During that time, Laura and Murray were living in Manhattan, Kansas, where Laura taught at Kansas State University. During the summer of 1945, they moved to Corvallis just before Murray turned 10 years old.

Murray spent his elementary and high school years in Corvallis. “I was naturally inclined to begin college at OSC, but after three years, I had decided that my ultimate goal was to become an architect,” he says. “That meant I needed to transfer to an accredited architectural school. I chose the University of Oregon in order to stay close to Corvallis, and also to benefit from the low in-state tuition, which at that time was only about $56 a term.”

Making His Mark in Architecture

During his college years, Murray’s parents always supported his choice of profession, especially since his mother had been trained in interior design. And so, “in recognition of their unwavering support,” as he puts it, Murray designed a contemporary new Corvallis home for his parents just prior to finishing his degree in 1959.

Following his graduation, Murray spent several years working for architectural firms in Corvallis and Eugene. Then he was offered a job as possibly the first on-staff architect to be employed by what is now the worldwide engineering firm of CH2M-HILL.

During the late ’60s, Murray’s story merged with Linda’s.

A few years before she met Murray, Linda had moved to Corvallis from Tulsa, Oklahoma – where, over the years, her father had risen from being a mail carrier to become Tulsa’s Superintendent of Mails.

“My dad always encouraged me to excel at whatever I did,” she recalls, “and he encouraged me to take the Civil Service Exam as a basis for a possible future career.” She did, and she passed with one of the highest scores obtainable.

As a result, upon her arrival in Corvallis, Linda was almost immediately hired as a secretary at the new water research laboratory that later became an integral part of the newly created U.S. Environmental Protection Agency.

However, after working for some time with highly trained scientists, Linda’s competitive streak kicked in and she decided she wanted to be on a much more equal footing educationally. With this as her new goal, and with Murray’s encouragement, she decided to take a class at the newly completed Linn-Benton Community College, where he had been the supervising architect during its construction.

“Taking this ‘trial class’ gave me a real sense of accomplishment,” Linda says. So why stop a good thing?

She then began what turned out to be 14 years of night school classes, starting at Linn-Benton and continuing after the couple moved to Washington, D.C. There she attained her associate’s degree at Northern Virginia Community College, followed by a bachelor’s degree and then a master’s degree, both in public administration, at American University.

“All of this higher education was accomplished in addition to maintaining a full-time work schedule with EPA, first in Corvallis, and later, in Washington, D.C.,” Murray notes. “Her dedication was extraordinary.”

After living in Corvallis for a number of years, the challenge of new career opportunities beckoned. So, in 1974, Linda and Murray moved to the Washington, D.C., area where Linda had been offered a position in EPA’s headquarters. After serving in several administrative positions, she retired in 2007 as Deputy Director of EPA’s Office of Environmental Justice, thus capping a 42-year EPA career. Linda was later honored as being one of EPA’s original Charter Members since she had been employed within another governmental agency that became a part of EPA at the time it was created in 1970.

During these years Murray was also successfully employed in senior leadership positions including Construction Manager for Gallaudet University and then as a Construction Executive for a nation-wide construction firm. Later, he was Vice President for Construction Management with an international consulting firm before retiring as Assistant VP of Facilities Construction for a large health care organization based in Northern Virginia.\

Following their respective retirements, Linda and Murray began a new chapter in their lives by both enjoying and combining their mutual love of world travel with their longstanding interest in photography and videography.

In time, however, “we began to feel the need to create a personal legacy that would hopefully benefit others less fortunate,” Murray says. “After careful consideration of various options, we eventually decided on the gift of our personal estate to OSU, in part to honor my parents who had both taught at OSU.”

The couple determined that endowed support funds would be the best way to assist needy students and faculty in perpetuity. However, since the bulk of their estate would not come to OSU until after their death, they decided the best way they could have an immediate impact would be to create one or more funds right away, which resulted in their making an initial outright gift of $1 million.

They also decided that this initial gift should be divided into several parts to spread its overall impact as widely as possible.

Accordingly, two endowed funds were created to honor Murray’s parents. First, the Laura B. Smith Faculty Scholar Fund was designed to support College of Business faculty in the area of interior and apparel design. Second, the Cairns K. Smith Faculty Scholar Fund was created to benefit history faculty in the College of Liberal Arts.

As Murray says, “Teaching was the absolute ‘end all focus’ of my dad’s life.” And “CK,” as Professor Smith was typically known on campus, was widely recognized as an outstanding educator. An article about his retirement, entitled, “No Ordinary Professor,” noted that his unusual success in the classroom likely was a major influence on many hundreds of students, and a significant force in the shaping of their lives.

Thus, a part of the Smiths’ initial gift, in addition to their ultimate gift of their entire remaining estate, will help shape the careers of “up and coming” faculty at Oregon State for years to come.

As Murray’s dad often commented, “By the time many promising young teachers’ careers have advanced to where they desire to further their education, they have typically acquired family obligations that make such advancement financially impossible.” But as Murray has stated in connection with their gift to the OSU Foundation, “We sought to provide a means to partially offset this problem, at least to some degree.”

Both Murray and Linda have personally seen how sometimes relatively small amounts of money can have a huge impact. No one, they believe, should be forced to drop out of school because they lack a few hundred dollars for an unexpected expense such as a car repair or unexpected medical bill.

Accordingly, the couple also made an additional $50,000 gift to endow an emergency fund to help students who suddenly face unexpected financial obligations.

From "MurLin" to future generations

And finally, the remainder of the Smiths’ initial gift has created an endowed scholarship fund in the name of “MurLin,” the personal contraction of their first names that they’ve enjoyed using throughout their more than 50 years of marriage. Over time, with added gifts from their estate, the MurLin Student Scholarship Fund will grow exponentially, helping to make a college education realistically possible for generations of students.

“We truly hope that our initial and future financial commitments to OSU will benefit many deserving students, inclusive of any and all that have as part of their lifetime goal, to help make the world a better place,” Murray and Linda say.