Mrs. Ogg is an active volunteer for ARCS (Achievement Rewards for College Scientists) Foundation, both in Oregon and nationally. She is current vice president of Communications and former president of the Oregon Chapter and has served as vice president of Chapter Relations for the ARCS Foundation National Board. Mrs. Ogg received the ARCS Light Award, the organization’s highest honor, in 2013.

Mrs. Ogg’s husband, Larry, is the former president and CEO of Bank of America for SW Washington and Oregon and former chairman of the board of The Commerce Bank of Oregon. Mrs. Ogg earned her B.A. in interior design from Washington State University (WSU) in 1968 and is a current member of the WSU Foundation Board of Trustees. Mrs. Ogg is a Trustee on the MS Society, Oregon & SW Washington and serves on the Dougy Center Advisory Board.

She served on the New Avenues for Youth Board of Directors from 1999 - 2017. Before moving to Portland, she founded the Shoreline School District Foundation in Seattle and served as its president from 1991 to 1996. She and Mr. Ogg are members of SOLV’s Founders Circle. 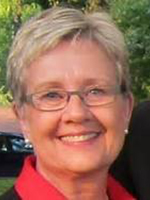