Pat Egan of San Francisco, Calif., is president and CEO of See’s Candies, with prior senior leadership experience at NV Energy and Pacific Power in Nevada and as chief of staff for former Oregon Gov. Ted Kulongoski. He previously served eight years on the OSU Alumni Association board and received its Jean & C. H. “Scram” Graham Leadership Award in 2017. Egan earned his bachelor’s degree in history from OSU in 1992, followed by a J.D. from Willamette University. 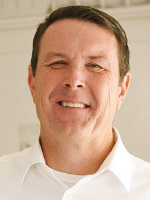