Community is important. It molds your interests and goals. It keeps you surrounded by likeminded individuals. In the best circumstances, those people can ground you and can point you in the right direction.

John Kittelman, ’18, has that positive influence in his life today, but he couldn’t always say that was true.
When he enrolled at Oregon State University to study mechanical engineering in 2014, drugs and alcohol were already in his life. Though he was getting by in his coursework, he was abusing “without even realizing it,” he said. With the wrong community behind him, Kittelman spiraled.
At the start of his junior year, under the influence, he jumped off a roof, sustaining injuries that left him unable to walk for two and a half months.
“That kind of was the beginning of the end of that part of my life,” he said.
But Kittelman wouldn’t find his way immediately. Stories about recovery aren’t linear, and a year after the accident, he hit an even lower point. Month long-benders and bleak thoughts turned into revelations. Changes needed to be made.
“For a while I was going it alone,” he said. “I didn't recognize that there were resources and facilities at Oregon State until six months into me attempting recovery.”
A friend told him about the Joan and Tom Skoro Collegiate Recovery Community (CRC), established in 2013 as a substance-free residence hall and recovery community that supports residents and external members.

Kittelman joined at the tail end of his undergraduate studies, looking for stability as he considered pursuing his master’s degree in mechanical engineering. He was impressed by the variety in the forms of recovery he found there, including Alcoholics Anonymous, Narcotics Anonymous, Recovery Dharma, SMART Recovery and more. 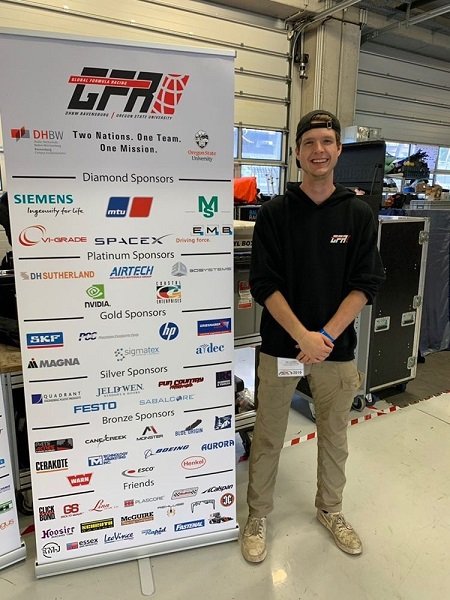 “There's not one path that we support or one strategy,” explained Kittelman. “It's just whatever works for you. And all those different perspectives and diversity within how we recover, is in my opinion, one of the cooler things about the CRC.”

Attending meetings, finding structure and being in a recovery environment made everything easier for Kittelman, who succeeded in earning his bachelor’s in 2018 and is currently wrapping up a master’s degree.

Most importantly, recovery opened him up to new opportunities.

“The CRC provided a place that I could really build the technical skills to better myself while maintaining my sobriety and mental health,” he said. “The extracurriculars that I did were highly stressful, highly time intensive and required a lot of responsibility.”

Among those extracurriculars was Global Formula Racing (GFR), an international collaboration between the Beaver Racing Team at OSU and the BA Racing Team from Dual Hochschule Baden-Württemberg-Ravensburg (DHBW) in Germany. Over several months, students from both universities collaborate to design and manufacture racecars that face off in a competition of speed, build and efficiency.

With the goal of being the best in the world, Kittelman’s leadership role meant peak stress. But thanks to the CRC, his peers, and a commitment to sobriety, he came out the other side stronger — and with a new career path.

According to Kittelman, over the 10 years of GFR’s existence, 15 students have gone on to work for SpaceX, the aerospace manufacturer founded by tech mogul Elon Musk. Kittelman just joined their ranks, and he’s ready to take off and see where his future takes him from here.

“I don't think I have a dream job,” he said. “I think I just like to do cool things. And right now, rockets seem pretty cool to me.”