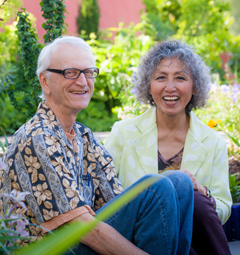 Since 2005 Sherry Sheng has been one of the Master Gardener Program's most active volunteers, playing a leading role in the development of its 10-Minute University program and guiding a successful voter campaign to form an Extension Service district in Clackamas County. Extending her impact, she has made arrangements through her estate to establish an endowed professorship to support the Master Gardener Program director. The $1.2 million commitment is the largest gift to date in the program's history.

"This gift virtually guarantees our program's continued growth and development," said Gail Langellotto, coordinator of the Master Gardener program. "Oregon State is already a step up in that most Master Gardener state programs don't have a full-time coordinator. But having an endowed professorship will position OSU as one of the premier urban and community horticulture extension programs in the nation."

Born and raised in Taiwan, Sheng lives in West Linn, Oregon, with her husband, Spike Wadsworth, who graduated from OSU in 1960. Now retired, her career highlights include service as deputy director of the Oregon Economic Development Department and as executive director of the Seattle Aquarium and Oregon Zoo.