Service to others has been a major through line in Lacey Beaty’s path. These days, it’s public service: Beaty, ’12, is the first woman to serve as mayor and the youngest-ever elected official in Beaverton’s history.

She was elected in 2020 after acting as a city councilor for six years. Beaty also served as a U.S. Army combat medic in Iraq, having joined the military right out of high school, in the wake of 9/11. The choice was both patriotic and pragmatic: she had been raised by a single mother and knew that paying for college would be up to her. After five years of active duty, the Montgomery GI Bill and a keen interest in the inner workings of democratic institutions led Beaty to a bachelor’s degree in political science from Oregon State and a master’s degree in management and organizational leadership.

Beaty was named to Portland Business Journal’s “40 Under 40” list of young leaders to watch for 2022. We talked to her about what led her to this point in her life.

What did the experience of being a combat medic in the Iraq War teach you that still affects your perspective to this day?

It taught me how to care for people when they were vulnerable and sick and how to put their needs ahead of my own. I was there at a painful place in a person’s life, and we knew we had to trust one another. It made me realize that I had to do more for the people I treated. I knew I had a higher calling.

Talk about what brought you to OSU. What’s something that stuck with you about your Ecampus experience?

After I came back from active duty, I wanted to continue on the path of political science. I had been attending college, taking a class or two, everywhere I had been stationed, and earned an associate’s degree in history. When I looked at undergraduate programs through the lens of political science, Oregon State had one of the best programs.

Being an Ecampus student allowed me to keep family and military service as my highest priorities. My husband is a major in the army now and was an active-duty National Guard officer at the time, so getting my degree online gave me the opportunity to continue my education while supporting my husband’s military career.

What project are you most excited about working on right now as mayor?

We recently were awarded a $2 million grant for a project we’re calling the Loop. We get to prioritize the pedestrian and biker safety and experience in downtown Beaverton and envision what new roads, sidewalks and bike lanes will look like. This is a project that will long outlive everyone on Beaverton City Council now. It’s a chance to build a dream for the future.

What do you do to avoid burnout?

Taking care of ourselves physically really sets the tone for our family. We do a lot of obstacle course racing, Spartan Racing, spin; we have a gym in our garage. My daughter just completed her second Spartan Race this weekend — she’s five. She raced with the older kids because the younger course was so easy.

Can you talk about what it meant for you to attend college on the GI Bill? What was it like attending college after serving in the military?

Going to the army to pay for college meant sacrificing an awful lot. It also meant I went to college when I was older. Later, talking about the Iraq War in a political science class with young people and looking back at history when I had lived the invasion was a challenging position for me to be in. When you live through an aspect of history, it’s not always as black and white as it seems.

What’s your advice to other alumni interested in making a difference in their communities?

Local office has more impact on your life than the president’s office will ever have. If we voted based on what impacted our lives the most, then our mayors, our school boards and our county judges would be at the top of the ballot.

Decisions are made by those that show up. And after a decade of Oregon politics, what I’ve noticed is that it’s a lot of the same people that show up.

Getting involved in a planning commission, board or school budget committee are ways that people can jump in and make their communities better. If every-one did a little bit, no one would have to do a lot.

Oregon State University is home to the largest military-connected community of any higher education institution in Oregon. To learn how you can support student veterans, visit bit.ly/osuvets. 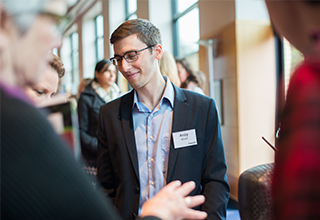