Mr. DeVaan retired from Microsoft as corporate vice president of Windows Development in December 2013. Mr. DeVaan joined Microsoft in 1985 and held a variety of executive and management positions at Microsoft from 1999 until his retirement, most notably as a senior leader of Microsoft’s Office and Windows businesses.

Mr. DeVaan has served on the OSU Foundation Board of Trustees since 2005 and as chair of the board from 2015 to 2017. He serves on the OSU Foundation’s Compensation and Talent Management Committee, the Committee on Trustees, and also serves as co-chair of the Development Strategy Committee. He served on the College of Science Board of Visitors from 2003 to 2012. Mr. DeVaan received the Alumni Fellow award from the OSU Alumni Association in 2002, was inducted into the College of Engineering Academy of Distinguished Engineers in 2003 and the Engineering Hall of Fame in 2016.

He received an Honorary Doctorate at OSU’s June 2011 graduation ceremony where he gave the commencement address and was inducted as a foundation member of OSU’s Phi Beta Kappa chapter in 2016. Mr. DeVaan graduated from Oregon State University in 1985 with B.S. degrees in mathematics and computer science. Mr. DeVaan is currently working to reduce the corrupting influence of money in U.S. politics. 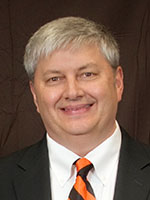